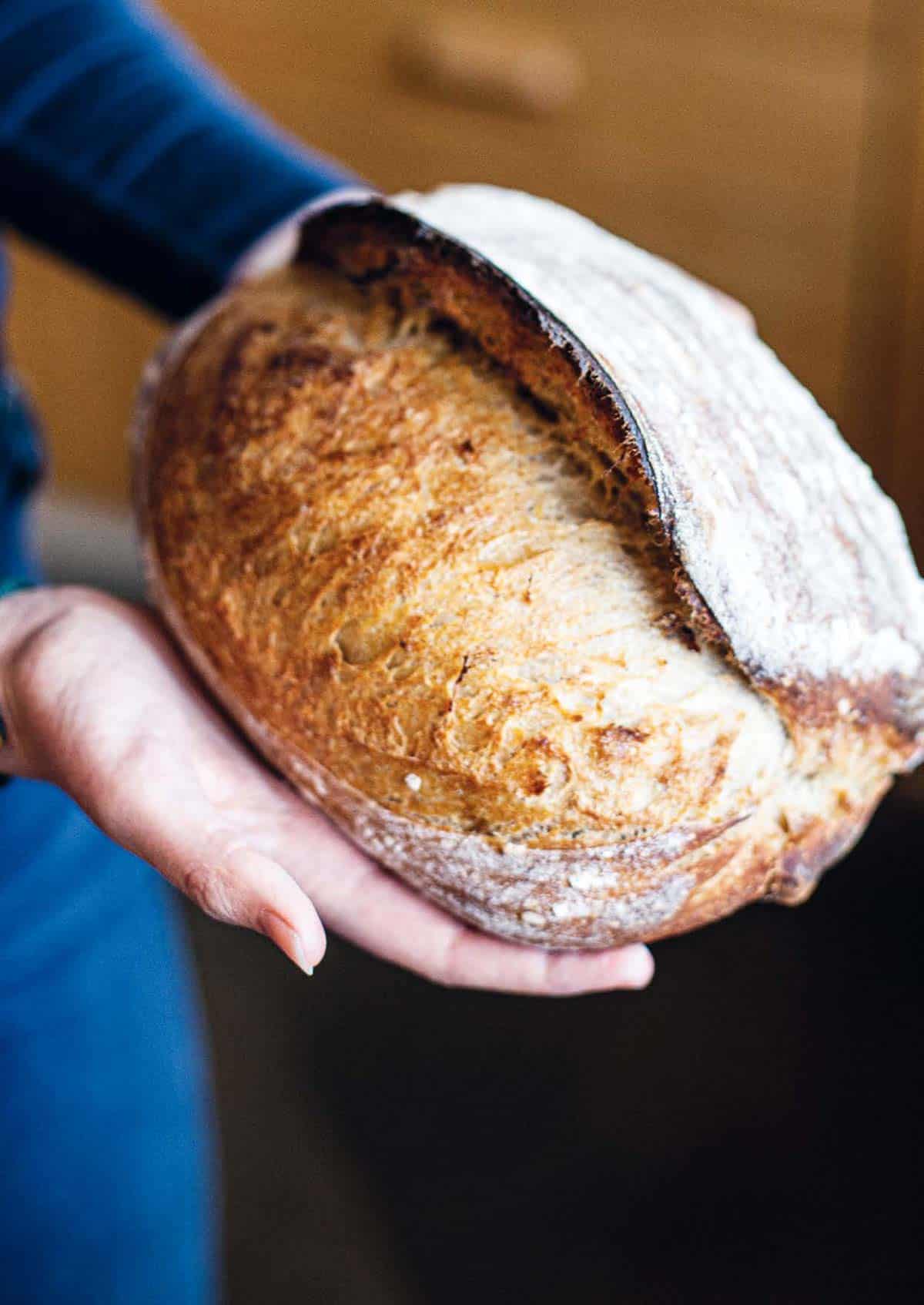 More than just a food fad, sourdough is an ancient practice of breadmaking that has captured our imaginations for centuries.

Among many things, a sourdough starter bubbling away on your kitchen bench means you’re taking care of your gut health through the proper preparation of grains. You’re connecting with nature in the form of the microorganisms and wild yeasts that are hanging out in your kitchen, and you’re slowing your life down in a nourishing way.

What Is It Exactly

Sourdough is the way people have made bread for centuries. Before commercial yeast and the quick-rise industrial loaf, bread was made using three simple ingredients: flour, water and salt. A sourdough bread culture – or starter – is made with a mixture of flour and water which, with time, captures wild yeasts from the air in your home and forms a relationship with the bacteria on the grain. When a small amount of this bubbly, active starter is added to bread dough it causes the dough to rise slowly over many hours.

While breads made from starters have been around since the Egyptians and are now common all around the world, the word sourdough originated in the 1800s in the goldfields of San Francisco. During the gold rush, miners would keep their starter in their pockets – it was a prized possession and their body heat kept it warm. This practice produced a particularly sour-tasting loaf, hence the city’s now-iconic San Francisco sourdough.

When single-strain commercial yeast became laboratory-grown around the turn of last century, and factory breadmaking took off in the 1960s, the age of industrial bread ready to bake in one hour was born. While this increased both production and profit, it decreased the time required to pre-digest the grain leaving higher levels of phytic acid and other anti-nutrients in industrial bread.

The reason sourdough has a pleasant sour flavour, a dense texture and is often a healthier choice lies in the work of the microorganisms. All grains have enzyme-inhibitors which makes them hard to digest unless properly prepared. The combination of acid-producing microorganisms and the long, slow rising time means these inhibitors and proteins in the grain (gluten) are broken down and easier to digest.

Sourdough helps us feel fuller for longer because this process of pre-digestion means not only are more nutrients available, they’re more easily absorbed by our bodies. Sourdough bread will keep for longer without spoiling, and can vary in flavour depending on the microorganisms present in your environment.

If you make it with flour, you can make a sourdough version of it by soaking – or souring – your flour in something acidic before baking. To do this successfully, you need four elements to create an environment for yeast to build and for pre-digestion to happen. The first is moisture; your flour needs to be wet enough. The second is warmth; between 18 and 25 ºC, third is acidity which, in the case of bread, comes from the starter, and the last is time, usually between eight and 12 hours.

With bread, you leave your dough to rise which soaks it in the acidity of the starter. To make sourdough pancakes or crumpets, soak – or sour – the flour overnight in something acidic like yoghurt, lemon juice or sourdough starter before making your pancakes in the morning. For sourdough cake, sour the flour in the morning then bake your cake in the afternoon. To make sourdough pasta (see Pip, issue 15), make your dough and leave it to sit overnight at room temperature before making it.

The Secret’s In The Starter

The key to successful sourdough is keeping your starter alive by keeping it warm and fed. It doesn’t take much, a little feed once a day is usually enough, otherwise you can keep your starter in the fridge and it will be happy for about a week before it needs feeding. While warmth is really important, make sure your starter doesn’t get too warm, or the bacteria will proliferate over the yeast. You’ll know your starter is active and ready for breadmaking when it is puffy and full of bubbles, and the smell will be slightly yeasty and sweet. If your starter is sour and flat, your bread won’t rise.

When you feed your starter, make sure you at least double its volume. If you have a cup of starter, you need to have two cups after feeding it – you can also triple or quadruple it in volume. Stick to this rule and you’ll always have a starter that is active and happy. You may want to remove some of your starter before you feed it, so you don’t end up with enough to fill a swimming pool. What you remove is called your ‘discard’ which can be used to soak flour for pancakes or to make pizza dough. You can make delicious sourdough crackers with starter discard alone.

Where To Get A Starter

If your friends make sourdough, they will probably be happy to share some of their starter, or you can make your own from scratch by following these steps: www.pipmagazine.com.au/eat/sourdough-starter-video-series. It takes about a week. 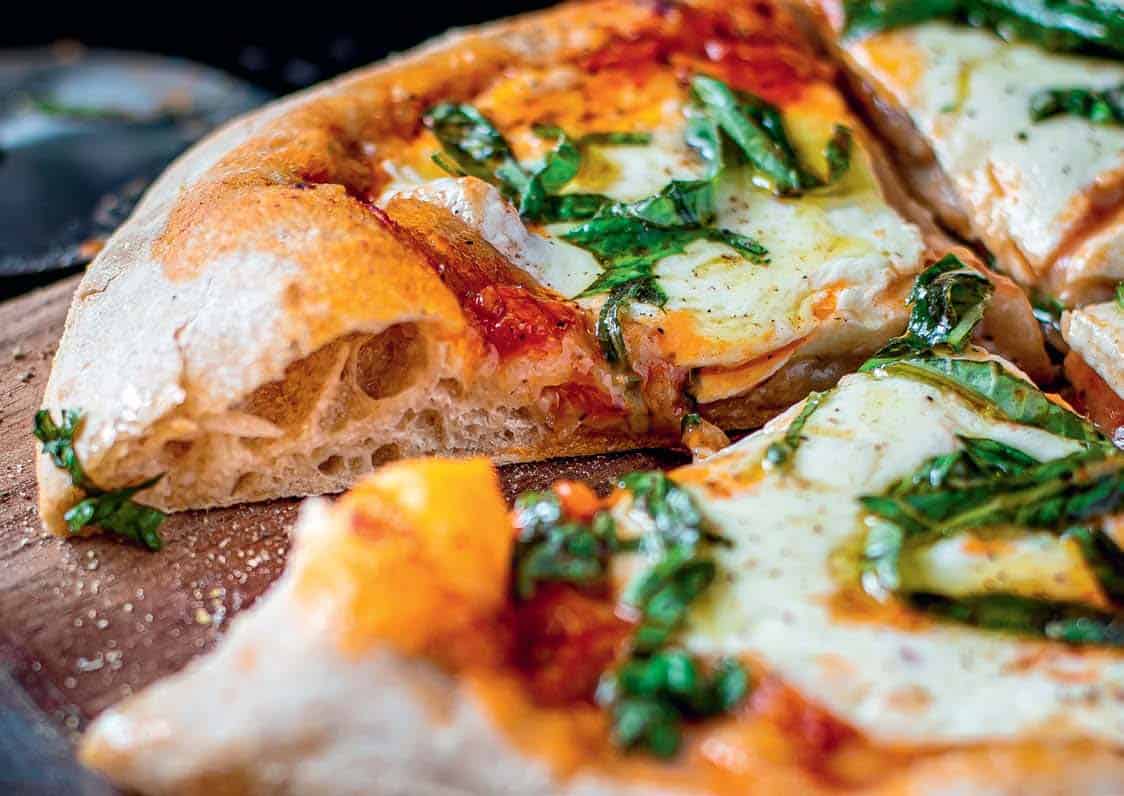 Method
Mix the starter into the water until it disperses. Add salt, then flour. You can use a range of flours but for a white, fluffy crust use a baker’s flour. The amount of flour will vary slightly depending on the type of flour used, so you may need to experiment a little.

Mix until it comes together to form a rough dough. Cover with a tea towel and leave on the bench for 8-12 hours or overnight. Fold the dough over on itself and turn 90 degrees, repeating until you have folded four sides. It can be stored in the fridge until an hour before you are ready to use it, or move straight onto the next step. Divide into four and roll into balls on a floured surface. Cover and let sit for 30 minutes. Shape into pizza bases; do this by hand or roll them out with a rolling pin. Transfer bases to a floured pizza stone or tray, before spreading with pizza sauce and covering with with your favourite toppings. Cook on the highest temperature until it’s cooked to your liking. The time will vary depending on the type of oven you are using.

Method
Place the starter, flour and water in a bowl and mix well. Cover loosely with a tea towel and leave in a warm spot overnight. The following day, melt a small amount of butter in a frying pan, reduce the heat and add greased crumpet rings (we use aluminium rings purchased from a kitchen store). Whisk the vinegar into your crumpet batter, followed by the bicarb soda and your mix will become frothy. Spoon the batter into the hot crumpet rings until around one centimetre thick. Cook over a low heat for 12 minutes, or until bubbles have covered the surface and the batter is beginning to set.

Remove the aluminium rings and flip the crumpets over to lightly brown the other side. Only have them flipped for a short time to ensure they remain light and fluffy. Transfer cooked crumpets to a plate and keep warm while you repeat the process with the remaining batter. Serve with butter or honey, or the quandong syrup on page 16 would also be great. 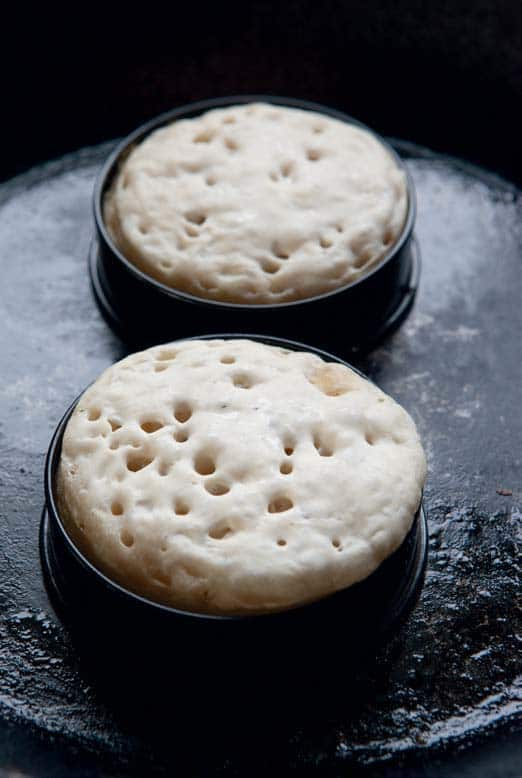 Method
In a small pot over low heat melt the butter, molasses and sugar together. Cool slightly and transfer to a bowl. Add all the remaining ingredients and bring together, being careful not to overmix the batter. Pour into a cake tin lined with baking paper, cover with a wet tea towel and leave in a warm spot for 6-10 hours. Transfer tin to oven and bake at 180 .C for 45 minutes or until a skewer inserted into the cake comes out clean.

Emily troubleshoots some common challenges of perfecting this ancient art of breadmaking in this issue’s Brains.