Sweet and juicy, dried and ground, grilled, boiled or popped, it’s easy to understand why corn is a favourite all-round staple.

Fresh, frozen, ground into flour or made into porridge, polenta and tortillas. Hugely versatile, you can snack on corn raw, feed it to livestock, turn it into syrup, even convert it into ethanol. Originating in Mexico and spreading rapidly through the Americas, the humble grain has established itself as an essential in gardens and kitchens all around the world.

There are two main types of corn, field corn and sweet corn. Field corn varieties can be ground into flour, used for stock feed and other applications, while the fresh corn we all recognise is called sweet corn.

Corn (Zea mays, also called maize) is from the grass (Poaceae) family and, while we usually consider the corn we eat a vegetable, it is technically a grain.

Common varieties of field corn grown at home are White Maize as well as multicoloured varieties like Glass Gem, Blue Mini popping corn and Painted Mountain and all are open-pollinated varieties. Sweet corn varieties include Golden Bantam and Gold Gold, also open-pollinated heirlooms, and Max which is an F1 hybrid.

Open-pollinated and heirloom varieties are the ones to grow if you want to save seed each year. As with all crops, modern hybrid or F1 varieties will not produce viable seed for replanting. F1 varieties are often called ‘super sweet’ corn and make up the vast majority of commercially grown crops.

Interestingly, baby corn is not actually just any corn variety picked young – there are specific varieties like Mini Pop and Strawberry Mini, which are bred to produce more ears of corn per plant.

Corn is a warm-weather crop and needs a moderate growing window to be productive. Favouring a Mediterranean climate, it can still be grown successfully right across Australia. It is frost sensitive and needs warm soil to germinate, so it is important not to plant it out until the chance of any late frost has passed. A light frost soon after the plants emerge from the soil may damage the leaves, but as the growing point may not have emerged above the ground, leave the damaged plants for a week to see if they recover before you decide to re-sow.

Corn prefers a soil pH of 5.5–6.5 and needs very fertile soil and adequate water to produce a decent harvest. Good levels of nitrogen and phosphorus are particularly important, so prepare your bed with lots of compost and animal manure. Where possible, plant into a bed previously growing broad beans or peas, which will have fixed nitrogen into the soil. The number of rows of kernels in each cob is set just five weeks after the plant emerges, and the overall length of the ear is set four weeks after that, so make sure your soil fertility is high right from planting to maximise the size of your cobs.

Corn may be direct sown in the garden, though if you want a jump on the season you can sow it in punnets and plant out when the seedlings are around 15 centimetres tall. Corn seeds will germinate faster if you soak them in water overnight, but if you forget, just sow at a depth of three centimetres and water them in well.

To make the most of your season, stagger planting with three to six weeks between successions, making sure older plants won’t shade out the younger ones. Once seedlings are around 30 centimetres tall, hill soil and compost around the base up to the lowest leaves. This promotes more root growth and strengthens the plants against wind damage.

Corn needs full sun and can form a useful trellis or wind break if grown densely. The ‘three sisters’ method – growing a trailing pumpkin or squash beneath it to shelter the soil and a climbing bean which can use the corn as a trellis – is a well-known companion planting tradition in North American cultures. Throughout the growing season, corn will benefit from heavy mulching as well as regular feeding with liquid tonics like seaweed or weed tea.

If you are short on space, corn can be tricky to grow. It typically doesn’t do well in pots and is best grown in blocks rather than in long rows or scattered throughout the garden. This is because corn is primarily pollinated by wind, rather than being pollinated by bees and insects. Corn pollen is transferred from the male flower at the top of the plant, which are called tassels, to the female flower beneath which are the sticky threads at the top of each ear called silks. Each thread corresponds to a single kernel of corn, so successful pollination is essential.

If you want to save seed, make sure you only plant a single variety of open-pollinated corn, or if you want to grow more than one variety, choose ones that mature at different times to avoid cross-pollination.

Maximum pollination and therefore the number of plump juicy kernels in each cob, is achieved by planting corn in at least two rows spaced 30–40 centimetres apart, with plants in each row at 30-centimetre intervals – you’re much better off planting wider blocks of corn than longer rows. If you really want to make sure of good pollination, you can shake the plants when the silks emerge to encourage the pollen to fall from the tassels. Each plant will produce only a small number of cobs, often one or two, with modern F1 hybrid varieties of sweet corn producing the most.

Most corn growers will have experienced pulling back the husk of a well-formed ear of corn only to find a squishy mess and a happy caterpillar. This is most likely the larvae of the corn earworm, also called the tomato grub or the cotton bollworm. Natural homemade sprays can be an effective control method, but they need to be applied periodically. An alternative to spraying is to exclude the nocturnal moths that precede the caterpillars by covering the crop with exclusion netting. Vermin and birds can dig up seed, so lay some mesh or netting over the bed until germination. Snails, slugs and grasshoppers can feed on the young seedlings, too. If these are an issue, it might be time to get some chickens or ducks to help with control. 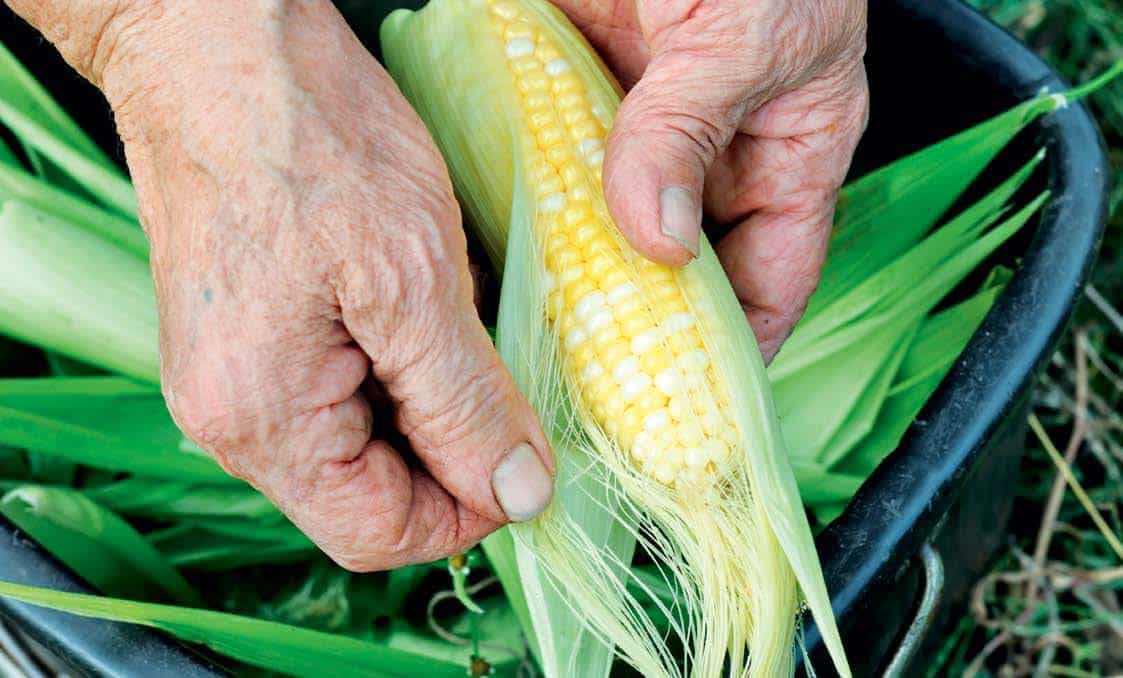 Sweet Corn
Sweet corn can take between 70 and 90 days to mature. Check the cobs once the silks have browned off, this indicates pollination has occurred. If the cobs feel heavy and firm, you can pull back the husk and check the kernels, which should be full and leak a creamy liquid when pierced. If the liquid is clear, it means the corn needs some more time to concentrate sugars in the kernels. If you notice some kernels are missing or there are large areas that haven’t developed, this means your pollination was poor. The missing kernels won’t fill in if you leave it longer, so don’t try to wait it out.

When harvesting starchy open-pollinated varieties, it’s best to refrigerate them quickly if you aren’t going to eat them the same day. The starches which give the corn its delicious sweetness will start to break down immediately after harvesting, and the flavour will be lost. Refrigeration will slow this process down, as will blanching and freezing.

Field Corn
Field-corn varieties are treated quite differently at harvest. Because they are a dried corn and not a fresh one, the heads need to be left on the plants until the husks – and often the whole plant – are completely brown and dry. Some varieties’ heads will also droop and fall away from the stalk, indicating they are ready to pick. Dent corn will develop small dimples in the tops of each kernel as it gets closer to harvest, a sign that the moisture content in the kernels is reducing.

The process of preparing field corn to eat is called nixtamalisation. While the practice eventually spread to traditional cultures both further north and in South America, it originated in Mexico. A Spanish adaption of an Aztec word, the root word of nixtamalise is ‘tamales’ which are widely eaten across Latin America. Nixtamalisation is cooking and soaking dried field corn kernels in an alkaline solution before grinding it into a pulp or mash.

The alkaline solution changes the kernel’s cell wall structure which increases the flavour, and makes it easier to digest, while also increasing the elasticity of the dough made from it. The process also makes its Niacin (B3) and protein more available, and decreases the toxins associated with the mould sometimes found growing on the surface of corn. When Europeans adopted corn as a crop they did not adopt the nixtamalisation practice, which often resulted in serious vitamin deficiencies.

Traditionally soaked in a wood-ash solution, pickling lime – or calcium hydroxide – is a modern replacement found at food wholesalers, brewing supplies specialists and some health-food shops. Make sure you purchase food-grade pickling lime, as calcium hydroxide is also used in applications such as water and sewerage treatment.

This article represents the permaculture principle OBTAIN A YIELD.