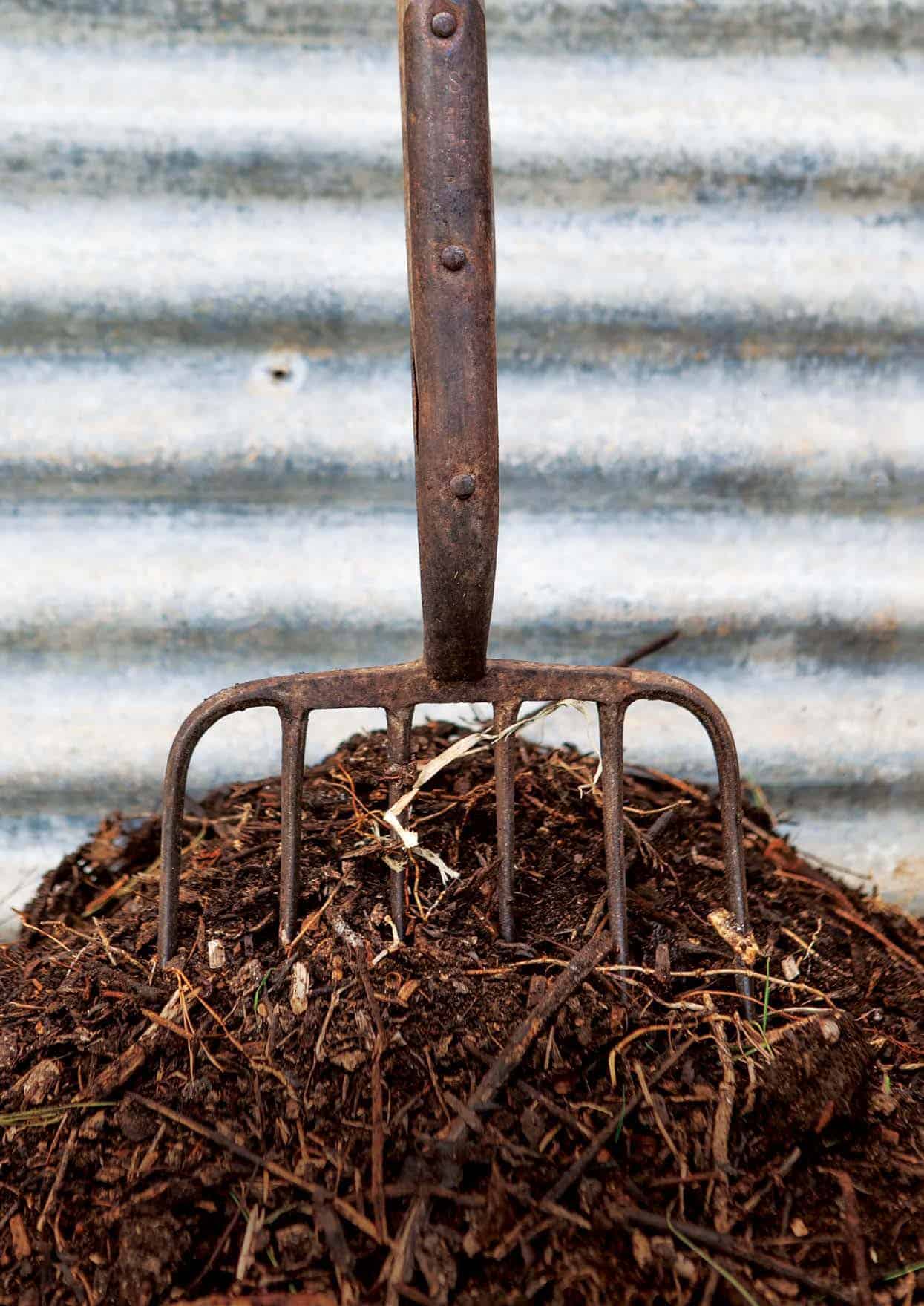 Replenishing our soils with organic matter like compost will increase microbial diversity.

In a world of a changing climate and an increasingly politicised and broken food system, regenerative agriculture is a large-scale example of practices we can adopt in our own backyards which are beneficial for both our health and our environment.

A lot of the farming you see in this country is what is known as industrial agriculture. Large-scale, highintensity production designed to maximise yield and profits in the quickest and most efficient way possible.

But the environmental impacts it’s having not only on the soil, but on our water systems, our biodiversity and our carbon emissions is devastating. But as the name suggests, regenerative agriculture takes a restorative approach to farming, where food production can actually lead to healthier soils, increased biodiversity, cleaner waterways and carbon sequestration, not to mention more nutritious and better-tasting results.

By ensuring the food we grow and eat has been produced using principles which are regenerating the soil and ecosystems, not only is it infinitely healthier for us, but we’re restoring the planet at the same time. If the entire world adopted regenerative-agriculture practices, it’s believed we could completely reverse global warming in as little as 30 years.

Most of the food eaten in Australia is produced through industrial agriculture. The industrial model uses synthetic fertilisers to increase yield, antibiotics to keep animals alive in large confined operations and heavy machinery to repeatedly till the soil. Industrial agriculture is about asking ‘how can this land make maximum yield and profits in the next few seasons?’

Regenerative agriculture, however, is where farmers work to produce food for the betterment of both the land and for the quality of the end product. A top priority is increasing soil health and organic matter and one of the key principles is to use cover crops and plant residue to ensure the soil remains covered throughout the entire growing season. Not only does this lower the temperature of the soil and feed the microbes within it, but it protects it from erosion. And, given the UN estimates that one third of the world’s topsoil has already disappeared and calculates we only have 60 years left before it’s all gone, it really is time to change the way we farm.

While practices will differ on every piece of land, regenerative agriculture is about asking the question ‘what can this land yield while restoring and increasing ecosystem health at the same time?’ 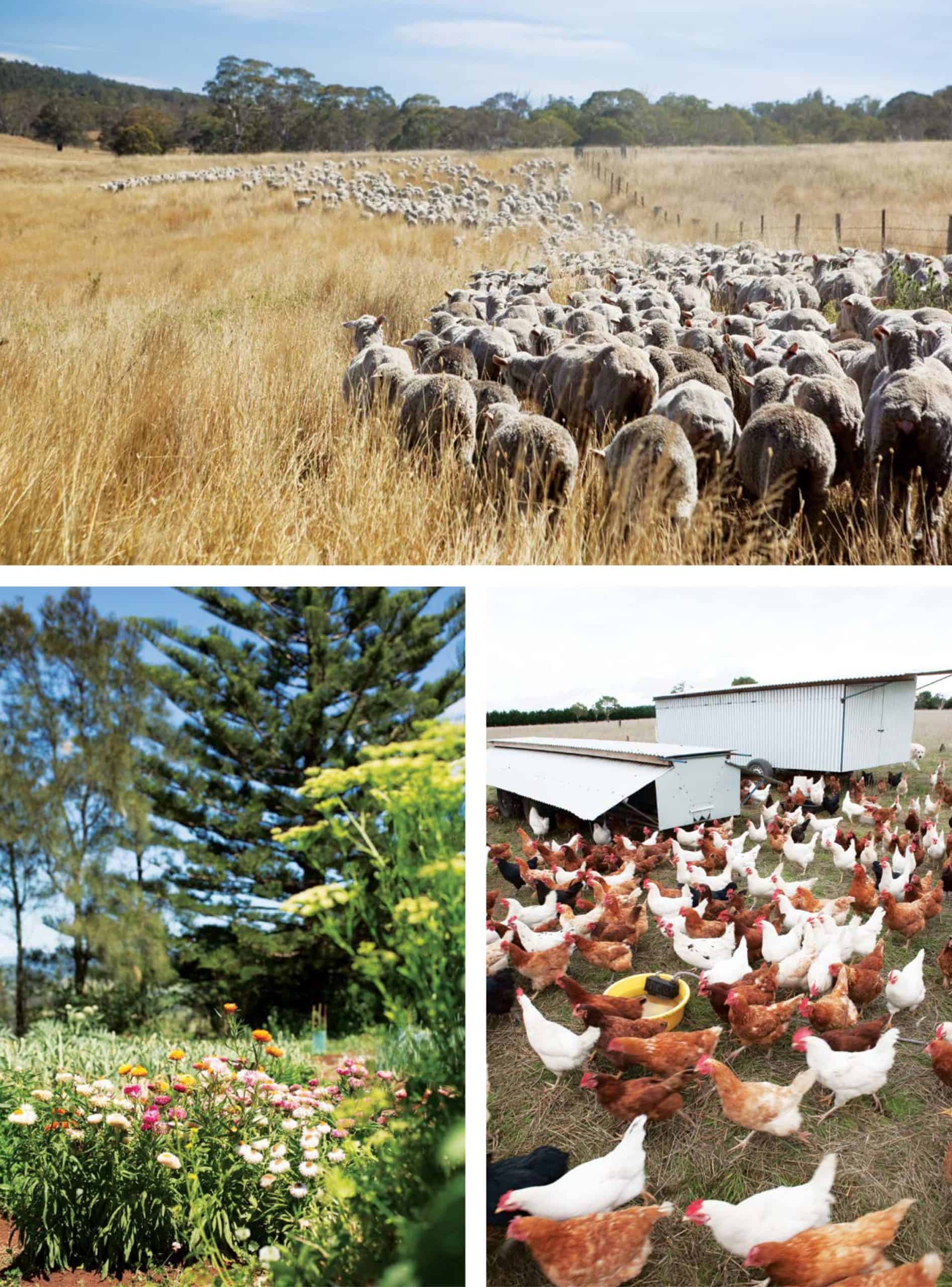 Clockwise from top Benefits of rotational grazing aren’t limited to large-scale food producers; Mobile chicken tractors, big or small, facilitate the process and allows fresh food for the animals as well as time for the areas to regenerate; Bee-attracting plants will encourage biodiversity.

Soil is a living thing and crucial to ecosystem health, so a fundamental principle of regen-ag is making sure the soil isn’t left fallow or bare to dry out, degrade and disappear. When plants cover the soil it is protected and soil microorganisms can thrive. Bare soil oxidises carbon and releases it into the atmosphere, whereas plants draw carbon dioxide from the atmosphere and sequester it, feeding the soil biology at the same time.

In practice, this might mean no-till farming in which the soil is not broken up by ploughing, cover crops are left in the soil, and soil life and soil structure is not disturbed. It might mean rotational grazing – moving animals slowly between smaller paddocks, leaving plenty of time for the pasture to recover and regrow.

The extra organic matter in the soil has so many benefits, not least water retention. If soil is covered, healthy and alive with mircoorganisms it will absorb rain more easily and retain it for longer.

We can encourage biodiversity below the ground in our microorganisms, too, by adding compost, green-manure crops, compost tonics and mineral soil supplements. This diversity will create topsoil, increase organic matter and produce far healthier plants. Having thriving ecosystems within food-producing farms can mean higher yields and fewer pests and pathogens.

Toxins most commonly used in industrial agriculture are broad-spectrum organophosphate pesticides and herbicides such as the ubiquitous glyphosate, all customarily sprayed on crops and pastures. Antibiotics and synthetic drenches are routinely used on conventionally farmed animals. The toxins in these products break down soil life, leach into waterways and leave residues in the foods we eat. In regenerative agriculture, these toxic products are replaced with natural alternatives such as using mineral licks and rotational grazing of animals to break the worm cycle. Large scale, broad-acre crop farms will instead spray liquid seaweed, worm wee and organic compost tonics to encourage soil health and plant growth.

Regen-ag is a relatively broad term and can cover a lot of farming styles. Indigenous Australians practise the ultimate sustainable farming system which has helped them thrive for many thousands of years – and some of these processes are being introduced into successful regenerative agriculture systems, such as increasing native pasture species and cultural burning.

Some farmers are practising regen-ag systems which have been developed more recently, such as biodynamics, pasture cropping, holistic management – even permaculture. It’s worth familiarising yourself with these practices so when you are investigating how your food is grown, you know if you’re contributing to the regeneration of the ecosystems around you as well as the all-important sequestration of carbon dioxide. Because not only can we make a difference in the way we choose to grow food in our own backyards, but we can make an equally significant one with every food dollar we spend.

This article represents the permaculture principle OBSERVE AND INTERACT.