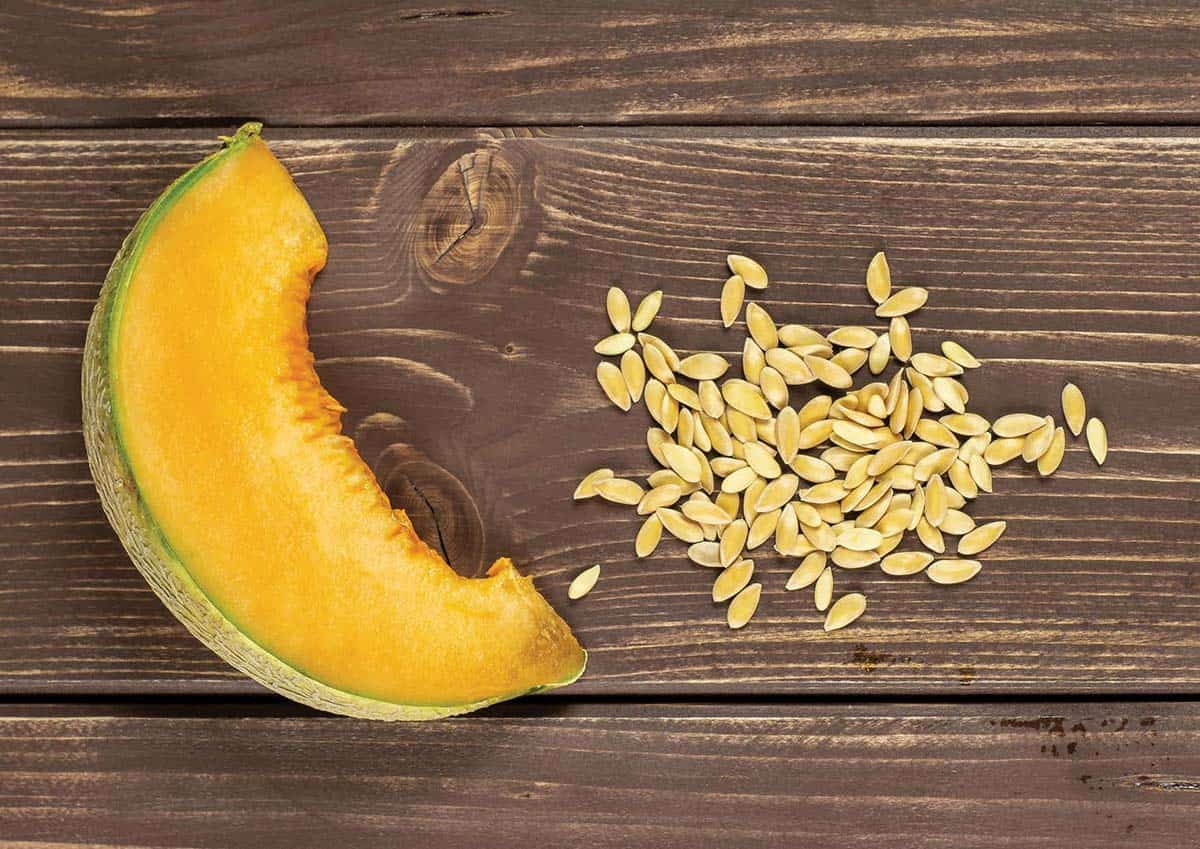 Cucumis melo – cucumis is the Latin name for cucumber and melo from an Ancient Greek word relating to apple.

From tropical western Africa and introduced to southern Europe 2000 years ago, melons have been a popular fruit for a very long time. A distinctive group of melons called cantaloupes were developed in a place called Cantallouppi near Rome, where they became very popular with the emperor Tiberius. They were then introduced to Armenia from where they reached Iran, which became a secondary centre of diversity.

Rockmelon needs no introduction to most, but the wide variation that exists is not represented commercially. Their shape and size can resemble anything between a cucumber and a pumpkin, the surface can be netted or warted and their skin colour can range from white through to black.

Southern European farmers prefer two- or three-year-old seeds. They often pre-germinate them in a warm compost for 24 hours wrapped in a moist cloth. Melons need a long, frost-free growing season to be sweet. Tip pruning can be done at a very early stage and will benefit the setting of fruit by encouraging many growing tips as well as the formation of early female flowers.

Rockmelons will cross with many other melons but not watermelon (Citrullus lanatus) because it is a different genus. To raise pure seed, rockmelons need at least 400 metres between varieties.

Selection must be made for a vigorous plant: to start with, plant six seeds for each hole and rogue out the weak seedlings leaving only the two best.

The second selection happens at harvest time: choose the plants with melons that have a fine flavour, deepcoloured flesh and a small seed cavity. Pick fruit and allow to ripen another two days. Scoop and rinse the seeds and allow to dry for a week or so.

Store dried seed in an airtight container where they will last for five years if stored in a constant, cool temperature.

It’s better to keep newly picked rockmelons in a cool spot for a few days before consumption. The seeds are said to contain an active ingredient which hinders giardia, a tropical bowel parasite. Blend pulp and seeds together and drink it by the capful.

Older gardeners may remember the Green Climbing Melon, the Pineapple Melon, the Cavaillon, Winter malta, Greely Wonder or Table Queen. The more unusual include pocket melons such as Queen Anne’s or winter-keeping melons like Golden Beauty. There are Sakata’s sweet and Takii’s honey which are small, egg-shaped, yellow-skinned varieties with aromatic flavours.

This is an edited extract from Michel and Jude Fanton’s book The Seed Savers’ Handbook: A Permaculture Seed (Seed Savers Network 2020) www.seedsavers.net