Feijoa (or pineapple guava) is a hardy, evergreen shrub that bears a delicious juicy fruit perfect for muffins, crumbles and smoothies. We show you how to grow feijoa at home.

The utility and adaptability of feijoa (Acca sellowiana, formerly Feijoa sellowiana), make it a useful permaculture plant – a feijoa hedge has become a permaculture cliché!

An attractive evergreen shrub with edible fruit, the rounded leaves are green on top and cream below. Flowers are pink with prominent red stamens, while the fruit is oval and green.

Fruit is eaten fresh, scooped from the inedible skin, or made into jellies, wines, crumbles, smoothies and many other delicacies.

The flower petals are fragrant, sweet and edible. They can be removed carefully from the flower without affecting the subsequent fruit, and then used as a garnish, in fruit salad or just as a treat while in the garden.

The plants can be hedged to provide a windbreak or privacy screen. 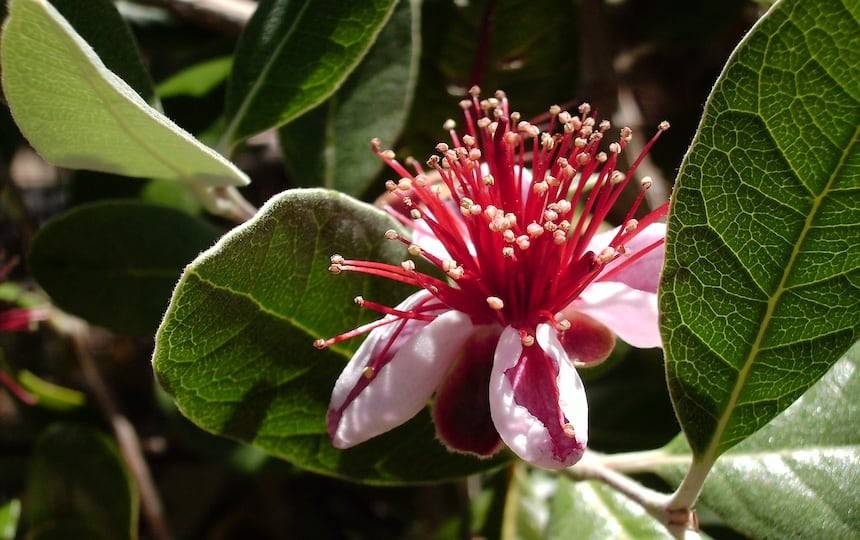 How to grow feijoa

Feijoa can be grown throughout temperate and subtropical climates. As a frost- tolerant evergreen, the feijoa can use winter rainfall for growth.

It is tolerant of drought and poor soil, but will grow faster and produce more fruit with additional water and soil improvement. It can be grown in full sun or partial shade.

Feijoa is rarely bothered by pests, although fruit fly can be a problem in some areas. Birds don’t seem to recognise the green fruit as ripe and even free range chickens ignore fallen fruit.

Feijoa can be pruned to a small shrub or dense hedge or left to spread into a small tree. Fruit set tends to be better when more than one individual is grown.

Feijoa is often grown as an ornamental shrub in suburban gardens, and the fruit is not eaten. This provides an incentive to network with the neighbours!

Propagation: Feijoa seeds are small and fiddly to work with but germinate well; cuttings also take easily. There are some cultivars available which can be grafted onto seedlings.

You can find the full version of this article in Issue #3 of Pip Magazine, which is available here.

How To Trellis Tomatoes